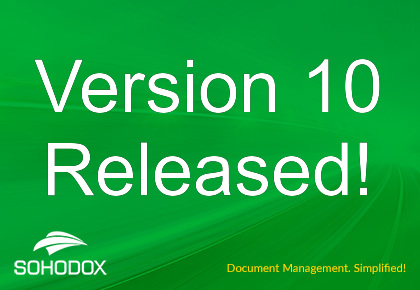 This is among the most important releases in the history of SOHODOX. Not because of the new features and bug fixes it has… but for what it enables us to deliver to our customers in the coming months. SOHODOX has been enhanced so that it continues to remain the best option available for small and mid-sized organizations to store, classify and search their digital documents.

We know we took quite some time to give you the new version. But the good news is that we have overhauled the entire platform on which SOHODOX is built. Here are some details…

SOHODOX FRAMEWORK Enhanced
The underlying framework of SOHODOX has been completely overhauled. This has taken us a couple of years to accomplish and we are very proud of what we pulled off. Since the framework is behind the scenes, in this release you may not see too many visible changes. However our work on the framework enables us to add new exciting features faster, fix reported bug fixes faster and release updates faster.

We have a long list of new features and enhancements lined up for the immediate future. If all goes well you will start seeing new SOHODOX releases with new features every few weeks!

Some of the new features in this release are listed below…

Edit a saved query
You can now edit saved queries in SOHODOX.

Search & Highlight Text (beta)
You can now see the values you searched for, highlighted within the found documents. This feature only works with PDF files and is currently in beta (we are working on improving the implementation).

The official release date of this version is December 22 2015. The upgrade setup for this version will be available by late next week.

How To Organize Office Paperwork In 6 Easy Steps
October 14, 2022

This website uses cookies to improve your experience while you navigate through the website. Out of these, the cookies that are categorized as necessary are stored on your browser as they are essential for the working of basic functionalities of the website. We also use third-party cookies that help us analyze and understand how you use this website. These cookies will be stored in your browser only with your consent. You also have the option to opt-out of these cookies. But opting out of some of these cookies may affect your browsing experience.
Necessary Always Enabled
Necessary cookies are absolutely essential for the website to function properly. This category only includes cookies that ensures basic functionalities and security features of the website. These cookies do not store any personal information.
Non-necessary
Any cookies that may not be particularly necessary for the website to function and is used specifically to collect user personal data via analytics, ads, other embedded contents are termed as non-necessary cookies. It is mandatory to procure user consent prior to running these cookies on your website.
SAVE & ACCEPT